Due to injuries, not being at home and also a possible house move on the horizon my LotR fangirly mission had fallen by the wayside a bit. I had a big long list of films to watch – and none of them were getting watched because I was struggling to sit at my desk long enough to watch a film. Or at least utterly failing to justify sitting doing “nothing” for that long!

So, the universe sorted it out for me! I was watching Top of the Lake on iPlayer, and about half way through the first episode I thought “That man in the lycra is oddly familiar.” Then I thought… “I’m certain I know him from somewhere!” Then I thought “Bloody hell, he’s only Faramir!!”.

See? The universe will provide – or it’ll provide handsome talented men to ogle at the very least. I’ve only watched the first two episodes so far, but it’s really good. Bit creepy, and very good.

I listened to the Blade of the Poisoner but sadly, as I’m late in recommending it – it’ll probably be missing an episode or two. It’s an adaptation of a book by Douglas Hill, which is a book I’m going to hunt down. (Hopefully for cheap on eBay, with old book page smell… *sigh*) The radio adaptation’s language was simple, but effective. I don’t like it when authors unnecessarily complicate language when simple terms will do. Don’t get me wrong, I love good words – one of my current favourites is Soporific – but I have to admit, I struggle with overly complicated phrasing. I much prefer books where it doesn’t matter if you get over-excited by the plot and miss a word or two. I think that’s why I struggle a little with actually reading Douglas Adams. I had to keep going back and making sense of what I’d read. Radio series suit my low-attention-span much more.

While I’m at it, I’m going to recommend Marcus Brigstocke’s Brig Society, which is wonderful. In the last episode he volunteered as King of Scotland, to ease the tensions between the English and the Scots.

Finally, I haven’t ever directed people to this before, but if you like satire, they’re a must… The Now Show and The News Quiz alternate series on Fridays on Radio 4, at 6.30pm. Definitely worth a listen! You can even get a podcast to make it nice and easy to listen whenever you want.

I’m also taking up embroidery. I made a bookmark! I now have a crafty plan for my next project, but it’s a surprise. 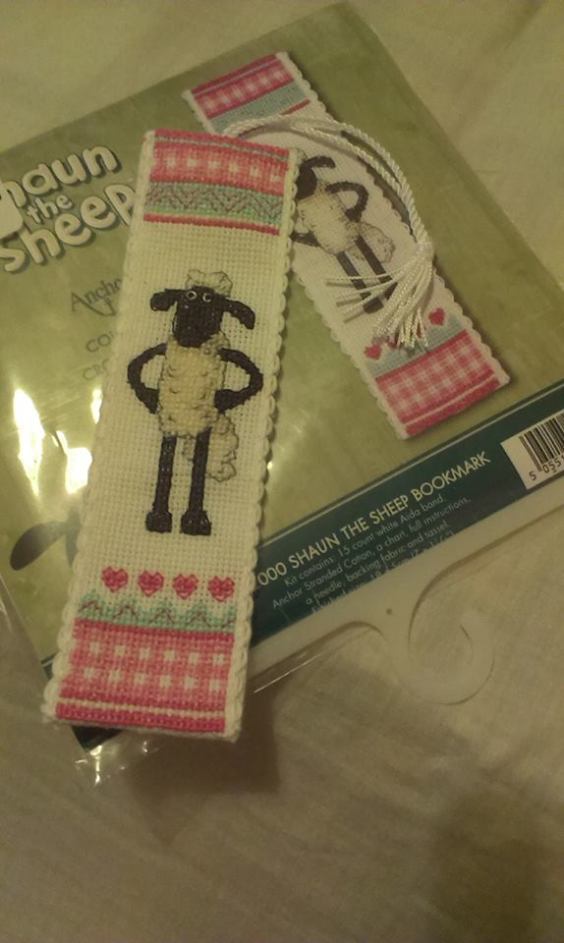 Ok, there we go – those series should keep you happy for a day or so?

Anton Lesser is a bit of a God to me. His voice is so soothing it helped with my insomnia, but he’s also played a lot of awesome things, I seem to remember he was in Fatherland which was great, he’s also Falco in the series about the Roman informer. Looking on wikipedia, it looks like he’s done everything!

Anyway, this is Brave New World by Aldous Huxley, which I’ve always meant to read. Apparently it’s the basis for the idea behind the Matrix. I know, I should read the book first, but dissertations have dampened my enthusiasm for the written word a little.

Not listened to this yet, but I’m sure it’ll kick ass.

I’m on my own for a whole week, it’s snowing outside so I can’t really go out much (bendy problems suck!) so I’d like it if you lovely internet people could recommend a film or two to keep me occupied during the week. I’ve currently got on my list:

Maybe I should have a fellowship weekend – watching a film by each of the members of the Lord of the Rings fellowship. I’d probably not have that much time spare though? Does give me an excuse to watch Equilibrium though.

I’m also hoping to finish Straken by Terry Brooks this week (Which is so cheap on Amazon, Cheap second hand books will ruin my finances!!). In Brooks’ books there tends to be a point by which you’re surprised nobody’s died… I’ve reached it and have been a bit terrified to read on. Got to though because then I can start on Gormenghast which was my Christmas present. I tried to read it years ago because I loved the BBC adaptation of it (It’s where I developed a slight Rhys-Meyers obsession I think)

And yes, I will do dissertation work – but if I exclusively look at statistics, my brain will melt.

For now though, I am going back to my warm double bed, with a cup of tea and some chocolate to listen to the final instalment of Neverwhere, which I have thoroughly enjoyed. Well done BBC!

I am a regular listener of BBC Radio 4 Extra. (Which used to be BBC Radio 7, which was much easier to say. It got re-branded and has Ambridge Extra on it. It’s like The Archers for people who don’t like cows.) I have been listening for well over 2 years now and have come across a serious problem. They repeat programming so much!!

Every day, most sections get repeated twice. Being a Sci-fi/Fantasy nut, I love the 7th Dimension, the sci-fi section, and they often have amazing adaptations of well known authors… Lovecraft, Bradbury, and occasionally the less-literary but no less awesome Doctor Who radio adaptations. Listening to the radio helps me work, so I will listen for several hours a day, so I can often hear the same show twice.

I understand that most people won’t listen to the radio continually for hours (or at least not spoken word radio), so I will accept these repeats as a reasonable device to allow their programmes to not be missed. It seems a little redundant in times when the internet is so readily available and all their shows are available online (bearing in mind it’s a digital station), providing the iPlayer technical gremlins have been kept in their respective boxes, but I will accept that some people don’t like listening to the radio online.

However in the last two years of listening I have realised that they recycle a LOT of programming. I’ve heard “The Woman in Black” at least twice in the last year. This week, Slipstream is being broadcast again. The problem for me lies in the fact that I’ve got quite a good memory. Granted, perhaps a 24 year old student isn’t within Radio 4 Extra’s typical readership. There are some dramas that lose their impact on the second time round. The impact of these is related to the suspense of the story. Once you know the twist, the magic is gone. I loved Rendezvous with Rama the first time I heard it. Once you find out the twists and get to the root of the problem, the prior episodes are redundant.

Some can be repeated over and over, and scripting can keep you held even more with each successive repeat. A good example of this would be Douglas Adams’ Hitchhikers series. (Yes, even the posthumous ones), or Fatherland with Anton Lesser. These are marvellous and could be repeated a million times and I’d probably never tire of them. Even the BBC adaptation of Lord of the Rings with the English sounding Orcs and the fact that they cut out Glorfindel as always (The travesty!!!) is amazing. It’s also extensive with thirteen 1 hour long episodes. Why can’t we listen to those?

Repeat things that your dedicated listeners won’t get bored with, and fill the remaining gaps with programmes that haven’t been broadcast for at least a year.

Bear in mind that this station is part of the BBC, and so probably has access to most of the BBC’s extensive archive – and I end up spending my afternoons listening to re-runs of the same shows over and over – I’m not entirely sure it’s good enough.