An origami rose. My wonky hands made the twisty bit difficult, but it turned out ok-ish.
What do you guys think?

Just imagine a bigger version full of little Easter eggs for kiddies, or these tiny ones for wedding favours! 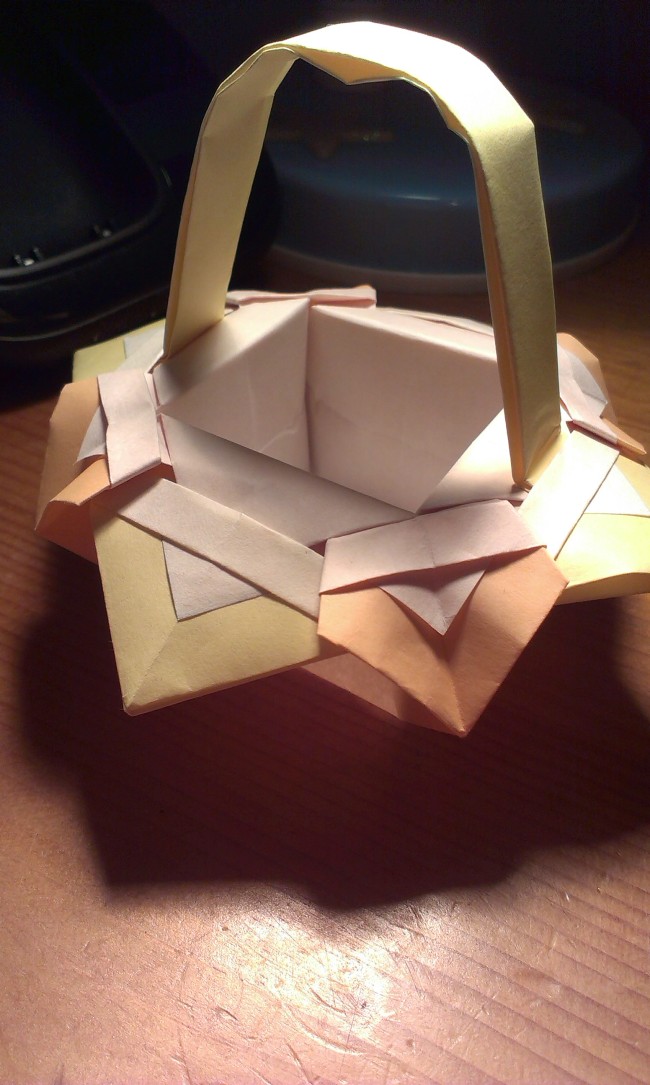 Due to injuries, not being at home and also a possible house move on the horizon my LotR fangirly mission had fallen by the wayside a bit. I had a big long list of films to watch – and none of them were getting watched because I was struggling to sit at my desk long enough to watch a film. Or at least utterly failing to justify sitting doing “nothing” for that long!

So, the universe sorted it out for me! I was watching Top of the Lake on iPlayer, and about half way through the first episode I thought “That man in the lycra is oddly familiar.” Then I thought… “I’m certain I know him from somewhere!” Then I thought “Bloody hell, he’s only Faramir!!”.

See? The universe will provide – or it’ll provide handsome talented men to ogle at the very least. I’ve only watched the first two episodes so far, but it’s really good. Bit creepy, and very good.

I listened to the Blade of the Poisoner but sadly, as I’m late in recommending it – it’ll probably be missing an episode or two. It’s an adaptation of a book by Douglas Hill, which is a book I’m going to hunt down. (Hopefully for cheap on eBay, with old book page smell… *sigh*) The radio adaptation’s language was simple, but effective. I don’t like it when authors unnecessarily complicate language when simple terms will do. Don’t get me wrong, I love good words – one of my current favourites is Soporific – but I have to admit, I struggle with overly complicated phrasing. I much prefer books where it doesn’t matter if you get over-excited by the plot and miss a word or two. I think that’s why I struggle a little with actually reading Douglas Adams. I had to keep going back and making sense of what I’d read. Radio series suit my low-attention-span much more.

While I’m at it, I’m going to recommend Marcus Brigstocke’s Brig Society, which is wonderful. In the last episode he volunteered as King of Scotland, to ease the tensions between the English and the Scots.

Finally, I haven’t ever directed people to this before, but if you like satire, they’re a must… The Now Show and The News Quiz alternate series on Fridays on Radio 4, at 6.30pm. Definitely worth a listen! You can even get a podcast to make it nice and easy to listen whenever you want.

I’m also taking up embroidery. I made a bookmark! I now have a crafty plan for my next project, but it’s a surprise.

Ok, there we go – those series should keep you happy for a day or so?